The flute is a musical instrument of the woodwind family. Unlike woodwind instruments with reeds, a flute is an aerophone or reedless wind instrument that produces its sound from the flow of air across an opening. Flutes are the earliest known musical instruments. A number of flutes dating to about 40,000 to 35,000 years ago have been found in the Swabian Alb region of Germany. These flutes demonstrate that a developed musical tradition existed from the earliest period of modern human presence in Europe.

Guitar Village School of Music is in Frankston.

All lessons are $30 for a private half an hour. 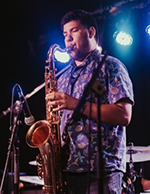 After playing the saxophone for 10 years, Sebastian is eager to pass down his musical knowledge to new students.  Sebastian also teaches Clarinet, Flute and Piano

Sebastian studied Jazz improvisation, Big Band music, and composition at The James Morrison Academy of Music in Mount Gambier, South Australia. He was able to be tutored by some of the best jazz musicians both in the country and internationally. During this time, he had the opportunity to perform with many such as The Voice runner-up, Darren Percival, and, of course, James Morrison himself.

Although Sebastian is primarily trained in jazz, he is also proficient in other genres such as Blues, Rock, Pop, and Classical. Sebastian is currently the saxophonist in The Chris Commerford Band and Club 54 Band.

Guitar Village School of Music is located at 439a Nepean Highway in Frankston, just a 40 minute drive south of Melbourne on the Mornington Peninsula.